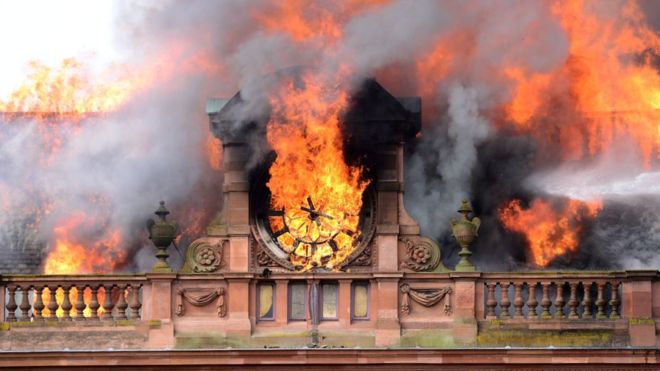 Primark will have to pay for security staff at a cordon around its fire-hit Bank Buildings, the deputy lord mayor of Belfast has said.Emmet McDonough-Brown said the council is currently paying for the cordon as there is a public safety issue.However, he said that the council is paying on the basis that it will recoup as much of the money "as is humanly possible".The cost of the cordon is set to reach almost £300,000 by the end of the year.The safety cordon has been in place since fire destroyed the Primark shop on 28 August."It's ratepayers' money, public money, and certainly we believe that money should be returned to the ratepayers of Belfast by either Primark or their insurers or whoever that liability should fall to," Mr McDonough-Brown said.Primark fire hits Translink's bottom lineBelfast city centre walkway opensCity footfall 'down 60%' from last year"Public money is valuable and it can't be spent lightly, and where Primark have the primary responsibility for the safety of the building then it is up to them to make sure that any security costs are met by them."Certainly our expectation would be that they should pay and we will be aggressively pursuing every avenue to make sure they do pay," he added.In response, Primark said it has insurance in place that covers the fire.It said that any claims against that policy will be handled by its insurers directly and it would not be appropriate for the company to comment further.Security staff, provided by Belfast company Eventsec, work 12-hour shifts at six locations around the cordon.Belfast City Council, which is footing the bill, said it had "opened dialogue" with Primark regarding such costs.The cordon could be in place well into 2019.In September, the BBC revealed the council was paying for the security.At the time it was unable to provide how much this was costing, but the BBC has obtained the figures under Freedom of Information.'Dialogue'Up to 28 October 2018, the total amount paid on invoices received was £129,672.80.If the cordon is to remain in place until 31 December 2018, with the same level of security, the projected total will be about £296,000.It is understood a new walkway, which opened on Monday, will not result in fewer security staff.Work to secure Bank Buildings is expected to continue for several months, which means the cordon will remain in place.The cost is being covered from the City Centre Recovery fund, but money from the Treasury is not being used.A Belfast City Council spokeswoman said: "Bank Buildings remains unstable and with work ongoing to restore and stabilise the structure, security is necessary to minimise any danger to the public and to continue preventing people from accessing the site."The council has opened dialogue with Primark in respect of the costs incurred by the council in relation to maintaining public safety and the integrity of the cordon."That dialogue will continue with Primark, its lawyers and any relevant insurers."